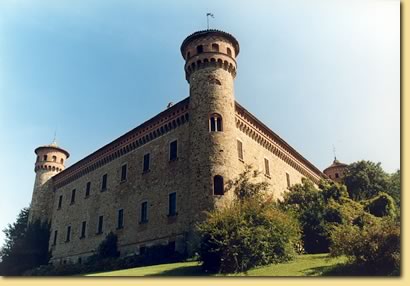 The Castle of Rezzanello, in the municipality of Gazzola, was first mentioned in the year 1001 in the list of properties belonging to the San Savino Monestary.

In 1212 Rezzanello was the site of a harsh battle between Guelphs and Ghibellines; the latter won with the help of the Visconti and took over the Castle.

During the following centuries, the castle was owned by various noble families. In 1357 the Boccapiccina, after the Chiapponi, and from 1796 the Scotti of San Giorgio were the proprietors. In 1894 it was bought by the Lombardi of Genova. In 1907 Giuseppe Manfredi bought it and refurbished it in a neo-romantic style designed by Camillo Guidotti.

In 1938 it was donated to the Suore Orsoline of Piacenza.

The Castle is trapezoidale in shape, with four surmounting cylindrical towers. Windows adorn the external façade; the large internal halls are elegantly furnished with decorated or hand painted walls and cotto floors. There are numerous original fireplaces.

An immense park surrounds the Castle with lakes, fountains and streams.

The Church of San Savino, built in 1859 in gothic-lombard style rises next to the Castle on a large terrace .Inside there are decorations of Arnolfo Ghittoni dating to 1926 and the portal and bell tower are the works of Camillo Guidotti.

The Castle of Rezzanello at present can be rented for weddings, meetings, fashion shows, concerts and conventions and can seat 2000