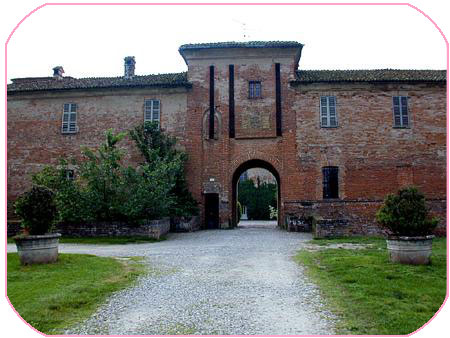 Bastardina is named after a military fortress called Bastarda similar in shape and located in Val D’Aosta.

The Castle is situated in the Agazzano municipality on the border between Val Tidone and Val Luretta. Built in the XII Century, on the right bank of the Tidone stream, for the defence of the salt route  which ran from Bobbio to Milan and crossed Agazzano and Borgonovo Val Tidone.

In the past the Bastardina Castle was the property of the Scotti of Sarmato. It later passed to the Anguissola and then to the Cremaschi until 1636 when it was severely damaged by the Spaniards. In 1667 Trissano Da Lodi bought the Castle and  has since belonged to the family. At present the owners are Fabbri Trissino.

Quadrangular in shape, the brick construction with four square towers is located in a beautiful park.

Two towers are on opposite sides of the perimeter, one dominates the main entrance where a draw-bridge once stood, and the forth tower is along the north end of the Castle which is still in part surrounded by a defensive moat.

A 15th Century,  nine barrel-vaulted portico in the internal courtyard leads to the main staircase decorated with baroque railings and reaches the upper floors.

The rooms on the upper level are furnished and frescoed and contain a precious galley created by Vinceslao in the XVIII Century.

The XIX Century Italian garden designed by Luigi Ghezzi in 1905 has winding paths and a rich variety of trees.

A small farm community  and the 16th Century Santa Croce  oratory were built after the Middle Ages and lie outside the main entrance to the Castle.

The Bastardina Castle today hosts a golf club and main halls where it is possible to organize meetings, weddings and receptions.