Castle and Village of Rivalta

Numerous fascinating localities rich in tradition can easily be reached from Podere Casale, farm holiday in the province of Piacenza.

The history of the Piacenza province has been influenced since the end of the XIV century by the domination of the Visconti and later by the Sforza.

The advent of firearms led to a transformation in the architecture of the defensive systems: massive walls, circular towers and cylindrical crenels.

At a later stage, castles lost their military function and became noble residences and centers of cultural and artistic activities. 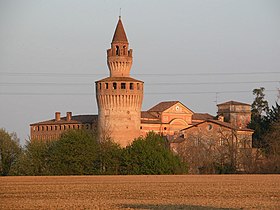 In the XIV Century, Rivalta is the domain of the Landi who still retain ownership through the branch of the Zanardi Landi Counts.

A lavish noble residence surrounded by a magnificent park and famous for the unique profile of the soaring “Torresino”.

Rivalta is rich in history with rooms dedicated to ancient and modern arms, flags, paintings, and rare objects.

Noteworthy: Hall Of Honor, the old kitchens, the Billard Room, the Music Room and Bedrooms with sumptuous canopies .There is also an exhibition dedicated to Military Costumes and a collection of 18th Century sacred vestments.

The Castle of Rivalta can be rented for ceremonies, meetings, art exhibitions and film sets.

The Castle is open: From February to November – Saturday, Sundays and Holidays.( February only Holidays) On weekdays only groups with a reservation.

The Museum is open: From March to November – Every Saturday, Sunday and Public Holidays For groups of at least 20 persons with reservation.