The villa is U shaped with a portico on three sides and an elegant entrance gate. 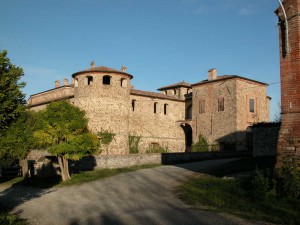 The ghost of Conte Pier Maria Scotti known as the “Buso” owing to his ability with the sword which delt holes in his victims, lingers around the walls of the villa .

The Rocca dates to the XIII Century: Reconstructed in 1475 it conserves the renaissance structure.

Rectangular with four cylindrical towers the Rocca is in part surrounded by a moat transformed in a French garden designed by Luigi Villoresi known for having designed the gardens of the Villa Reale of Monza.

The large halls, kitchens and prisons represent an exceptional synthesis between the austere medieval defensive architecture and the elegance of renaissance residences.

From the end of March to November: Sundays and Holidays. Weekdays only groups with reservation.