The first reliable historic documents of the castle date to 1037, year in which the fortress was surrendered to the monks of S.Savino by the canon of the Cathedral of Piacenza. 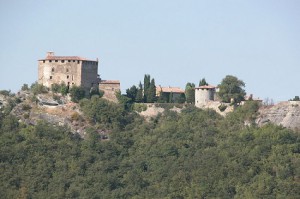 Fortress d’Olgisio is located above Pianello Val Tidone a few kilometres from Vicobarone. It is one of the most striking castles of the Piacenza province, with its irregular layout owing to the fact it was built embedded in the rock and adapted to the craggy terrain.

Three rows of massive walls protect the various sections of the castle with a single access to the north through two 15th century entrances.

The Bengalli Family of Pianello Val Tidone have owned the castle since 1979. Notable effort, sacrifice, work and willpower have managed to save what is considered the most beautiful and most legendary castle of the province.

Fortress d’Olgisio is open from April to October For further information and opening hours visit www.roccadolgisio.it