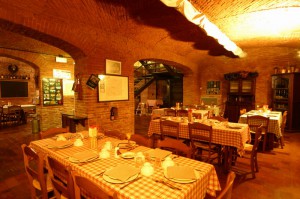 A short distance from Podere Casale, along a bending route surrounded by vineyards on the border between Colli Piacentini and Oltrepò Pavese, we arrive at an 18th century villa which gets or gives its name to the area: Casa Bella. Some write Casa Bella others Casabella but the address is a guarantee from a gastronomic point of view.

The Casabella restaurant is inside the villa. The Caravaggi Family inaugurated it at the beginning of the third millennium. In the kitchen, the female touch dominates with Paola Caravaggi and Roberta Civardi that move deftly between typical and innovation, in terms of cooking and ingredients that tend to lighten a cuisine- that of Piacenza- whose peasant origins demanded highly caloric meals.

Alberto Caravaggi takes over the dining rooms, offering rich stories of the territory, knowledge of wines and a careful eye on the needs of his clients. Guests are the center of attention and children are cared for from the high chair, to their special dishes and the possibility to play in the court surrouding the restaurant. Two dining rooms and a cellar for larger groups and a bottle of wine. A unique detail: in July the restaurant hosts a vintage exhibition you cannot fail to see.

The menu, aside from a very particular culatello roast, follows the piacentina tradition with acceptable prices.