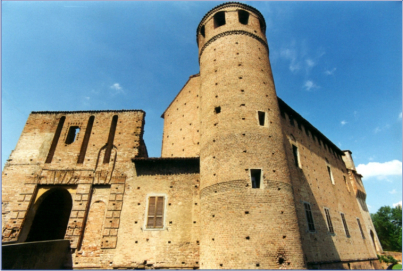 Calendasco is situated on the delta of the Trebbia river along the marshes in that area of the Po river on the border between the provinces of Lodi and Piacenza.

The flat countryside that surrounds the village is typical of the Po valley and its origins are antique. Ruins and settlements dating to the iron age have been found in the surrounding territory. Historic documentation confirms the presence of Romans and in 1158 Calendasco is among the towns under Barbarossa’s supremacy as declared in the famous Dieta di Roncaglia.

In the XIII Century in the locality called Tempio an important villa with surrounding cultivated land was under the management of the Knights Templar: a military outpost created for the protection of the routes crossed by pilgrims. After 1307 it was abandoned following the suppression of the Order by the King Philip of France.

Calendasco and the entire Piacenza territory were in a strategic position since the Roman ages – a commercial crossroad To Europe and the Mediterranean. Calendasco was also an important stopover along the Via Francigena during the middle ages and a memorial stone on the Po ford is proof of this.

The Calendasco feud and its castle were the domain of the San Sisto Convent of Piacenza and were contended by various noble families as of the XV century  the Pallastrelli, Scotti, Visconti, Arcelli and Confalonieri to mention a few.

The Castle of Calendasco dates to the IX Century and first mentioned in a document of Pope Urbano II. In 1346 it was destroyed by the Piacentini and rebuilt in 1372.

A mighty trapezoidal brick structure with Guelph crenels surrounded by a moat with three entrances two of which still show traces of drawbridges which have been substituted with cotto bridges.

The main entrance, protected by a large cylindrical tower, leads to an internal courtyard with two open galleries. The castle, owing to its importance as a port on the Po river, with a notable exchange of goods and people, in the past not only hosted armed defence guards but was also an important site for collection of duties. According to documentation available today, the noble Confalonieri Family resided in the castle for the longest period of time for nearly two hundred years between the XV and the XVI Centuries. The Castle today is in part privately owned and in part property of the Municipality.