The castle of Castelnovo Val Tidone 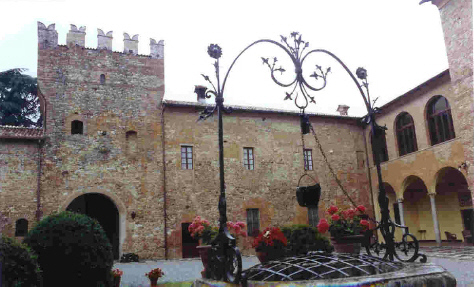 The castle of Castelnovo Val Tidone

In 1155 Barbarossa passed through Val Tidone and ransacked most of the towns and villages of the area. A fortress in Castelnovo was among the damaged.

Situated on a hill overlooking the village, the fortress was repeatedly destroyed by the pavesi invasions.

In ruins, it was abandoned and a Castrum Novum was built nearby.

The new castle dates to the XIV Century, is surrounded by a centuries-old park and is trapezoidal in shape with three circular towers on the corners and a forth surmounting the draw-bridge.

Mondimedievali.net states: “the older perimetral walls , as the cupsidal towers are nearly entirely of stone. Cotto squares were used in later interventions on the upper levels and for the entrance tower rebuilt according to the Lombard architecture of the Sforza period. The north wing was refurbished in the later renaissance period when a loggiato and main staircase were added.”

A draw-bridge precedes the entrance to a courtyard with a characteristic well. There a numerous rooms varying in size with coffer, vaulted or fresco ceilings.

The Castle has belonged to various noble families through the centuries: The Visconti, Da Fontana, Dal Verme, Dal Pozzo and Marazzani.

A tree-lined avenue connecting the Castle to Borgonovo Val Tidone was built in honor of the visit of Duchesse Maria Luigia D’Austria, former wife of Napoleon.

Today the Castle is private property but can be rented for ceremonies, receptions, meetings, art exhibitions, concerts and photo and film sets.
Further info available www.castelnovo.it