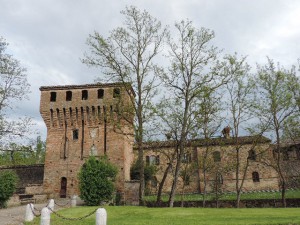 The Castle of Paderna is an austere sight, protected by solid walls and surrounded with a moat still full of water. The castle is mentioned in the Tavola Traiana as Fundus Paternus and later as Curte Paterno. Thereafter two notarial documents testify the purchase : the first dated 1028 and the second dated 1163 when the castle becomes the property of the San Savino Monestary in Piacenza.

In 1453 the Marazzani of Rimini become the owners and in the XIX century the Casali. The Castle was heavily devastated throughout the centuries and damaged at least twice: once in 1216 by the pavesi and in 1247 by the troups of emperor Federico II.

Area of the castle is located in the municipality of Pontenure, in the province of Piacenza, in the countryside of the Nure Valley. Rectangular in shape, a massive entrance tower equipped with harquebus and a double draw bridge characterize the castle. The ancient prisons are located in the main keep where, according to legend, Confalonieri’s throat was slit before he was able to confess a conspiracy of which he was informed and for which he was imprisoned. The legend narrates that his inhuman cries could be heard as far as “ the range of a crossbow “.

Some claim that the ghost of Confalonieri still roams through the castle, knocking at windows, pointing at people and sending out prolonged monstrous cries.The present owners confirm that a skeleton without a skull was actually found during recent excavations in the surroundings. The four towers all have the same square base but are of different shapes and sizes and are distributed along the walls irregularly. The north tower is outside the walls but within the moat.

The Church of Santa Maria is located in the residential area and dates to the IX century. The single nave has four roman columns, one having an overturned Corinthian capital. Built as a perfect cube within a circle according to the rules of Vitruvio, the church faces East towards the winter solstice and its dimensions are all multiples of three. There are twelve niches, a fresco of Madonna and Child and a templar cross. Vittorio Sgarbi has defined the church as flourishing gothic dating to 1380. The walls are cobblestone instead of brick.

Today the Castle is the seat of a farm which at the beginning of October hosts the “Frutti Antichi” event dedicated to a variety of plants, flowers and fruits the risk extinction.

The Castle can be visited from March to October Saturday and Sunday mornings or other days prior reservation. Tel. 0523/511645