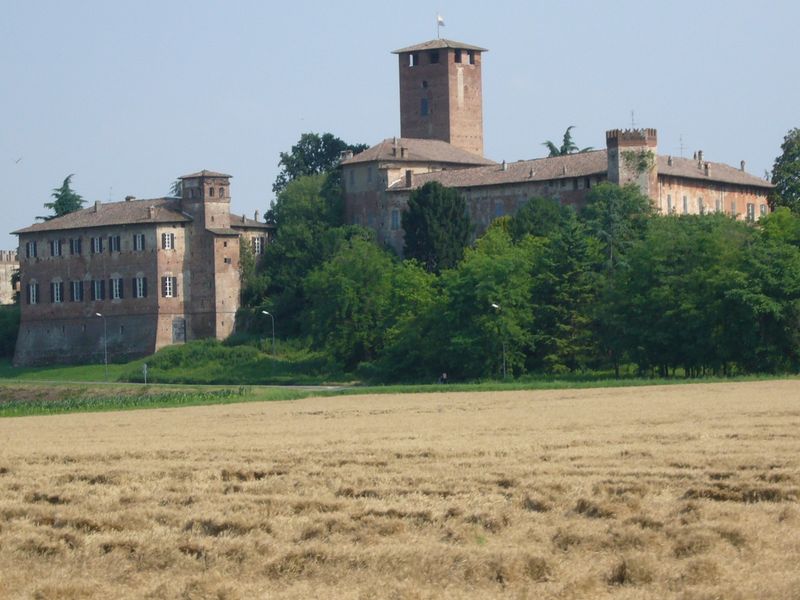 The first documents relative to the Sarmato Castle date to the end of the XIII Century and prove the castle was owned by Gherardo Pallastrelli an illustrious personality tied to San Rocco.

According to the legend, San Rocco da Montpellier, during his return trip from a pilgrimage to Rome, caught the plague near Piacenza and decided to isolate himself inside a cave hidden in the forest near the castle. He was assisted by an Angel who nursed his wounds with a miraculous cloud of raindrops.

The owner of the castle, Gherardo or Gottardo Pallastrelli, while walking his dog , discovered the cave and met Rocco who was still ill and like a good Samaritan assisted him until his recovery. Once healed, San Rocco departed and Pallastrelli from that moment on, conducted a life of sacrifice and pilgrimages and upon his death left a part of his riches to the poor.

The Sarmato castle was most likely a Longobard fortress built around the year 1000. Erected in a strategic position close to the Po and Tidone rivers, between Via Emilia Pavese and Via Frasncigena, two very important roads throughout the middle ages .

Alongside Castel San Giovanni and Borgonovo Val Tidone, Sarmato was a military frontier outpost in defence of the Piacenza territory (guelph ) continuously threatened by the rival pavesi (gthibelline).

One of the first documented battles dates to 1216 when the Milanese and Piacentine troops gathered before conquering the ghibelline fortifications in the hills surrounding Rovescala.

In 1363 Galeazzo Visconti, an nobleman from Milan, sold the castle to the Seccamelica family . In 1399 the castle became the property of Margherita Seccamelica, wife of Count Giacomo Scotti. Afterwards it was occupied by the Arcelli family but returned to Alberto Scotti in 1439.Count Zanardi Landi di Veano took over in the XIX century.

Originally rectangular, the castle was afterwards modified to a U shape. Many precious antique documents are safeguarded in the rooms of the castle including the archives of many noble families.

Cultural, literary and musical encounters are held in the study renowned for its precious frescos dating to the late gothic period and attributed to Bonifacio Bembo.

In the XVIII Century it became the residence of the Scotti Family of Sarmato and for the following century enriched with precious furnishings.

The walls enclose a small rectangular hamlet divided by two perpendicular roads with houses, three churches and a small fortress on the side.There are three entrances all protected . The main entrance is at the south end protected by a ravelin with two arches one for the passage of pedestrians and one for vehicles. Both had draw bridges. The other two fortified entrances are one to the east end and now the town hall and one to the west end now called “rocchetta”.

Santa Maria Assunta is the main church , built in the VIII century by the Longobard Prince Burnengo. Reconstructed around the year 1000, it was destroyed in a fire and rebuilt in 1572. Further modifications took place during the XIX century and transformed to a latin cross style in the 1950’s.

The neo-renaissance façade is adorned with Corinthian capital plaster strips. The inside is divided in three naves. An 1891 painting of the Virgin Mary of Enrico Prati,,a precious statue of the Madonna del Rosario of Geernaert and an 18th century organ can be admired in the apse.

The Sarmato Castle can be visited or rented for ceremonies, meetings, art exhibitions and film sets.