The Castle of San Pietro in Cerro 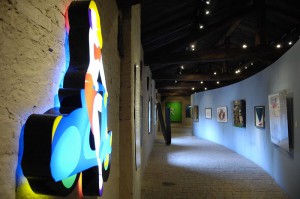 Bartolomeo Barattieri , ambassador of Piacenza  to  Rome and assigned to Pope Giulio II Della Rovere, ordered the construction of the castle of San Pietro in Cerro in 1491 as documented  by the inscription conserved in the internal courtyard of the castle. Bartolomeo’s father, Francesco Barattieri, received the feud in 1466 from Bianca Maria Visconti, widow  of Francesco Sforza.

The castle lies on the remains of a previous fortification dating to the XIII-XIV Centuries where traces of  a moat, at present filled in, are evident.

The castle is in the town of San Pietro in Cerro, where, according to legend, there was once a wood of  turkey oaks. It lies in the territory of the Piacenza province on the border with the provinces of Parma and Cremona, in the countryside of lower Val D’Arda half way between Piacenza and Cremona.

After the death of Bartolome, killed in his sleep by his servant in 1514, the castle remained the property of the Barattieri, and was their country residence for over five hundred years. The moat was filled to make room for a garden and windows were opened on the outer façade.

A  road lined with linden trees leads to the Spartan, austere brick construction which is in contrast with the elegance of the internal XIV century renaissance courtyard. Quadrangular in shape with two cylindrical towers, the remains of a draw-bridge at the main entrance are evident. On top of the  surrounding walls, battlements permitted hidden protection.

The entire castle can be visited and includes over thirty  richly furnished rooms, two main halls, the kitchens with a collection of copper cookware, and the prisons. The communicating rooms are accessible through an arc loggia. One of the main halls contains neo-gothic frescos and the library with a coffer ceiling contains over 1500 historic texts related to the city of Piacenza.

The Museum in Motion, MIM,  located in the loft, exhibits a collection of over eight hundred paintings and sculptures of Italian and foreign contemporary  artists from world war two on, with a section dedicated to artists from the Piacenza province.

The castle can be visited from March to October during week-ends and during the week reservation is required. Receptions and cultural events can be organized. Tel. 0523/983711