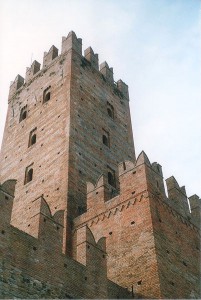 Grandiose and at the same time elegant, the Rocca of Castell’Arquato has dominated the entire valley from the town’s summit for over six hundred sixtyfive years.

Luchino Visconti ordered the construction in 1342 for military purposes as documented in the Registrum Magnum of Piacenza and was built on the foundations of a roman castrum dating III centuries B.C. repeatedly damaged by Gallic invasions.

The construction terminated in 1349 the same year Luchino Visconti died.

Built entirely with bricks and stones, it is still today a grandiose structure with impressive square towers and three draw- bridge entrances.

The Village of Castell’ Arquato is situated in the first hills of  Val D’Arda and has conserved the typical medieval structure and has not undergone significant changes over the centuries. On the summit of a hill, about thirty kilometres from Piacenza and about the same from Parma, the Rocca has controlled the passage since the Longobards and along with Bardi was an important outpost in battles with the Byzantines.

In 789 the Rocca fell under the domain of the Franchi to then be donated to the Bishop of Piacenza. From the middle ages to modern times, there have been numerous changes in ownership from the Scotti to the Visconti, from the Borromei to the Sforza, until 1707 when it became part of the Parma & Piacenza dukedom and afterwards reign of Maria Luigia of Austria.

Today  an important tourist site, it has been recognized a “town of art” where culture, history eno -gastronomic and naturalistic riches mix in perfect harmony.

Aside from the Rocca, which today hosts a Museum of Medieval life and is member of the “Association of Castles of the Parma & Piacenza Dukedom”,  there are numerous historical sites which merit  a visit. The most important being Collegiata di Santa Maria Assunta, the Palazzo del Podestà, Palazzo del Duca and the Torrione Farnese.

According to tradition, construction of the Collegiata began in 758 in honor of Santa Maria Assunta and donated to the Bishop of Piacenza in 789. After an earthquake in 1117, it was refurbished, enlarged and consecrated in 1122..

In the XV century an arcade, small cloister and bell tower were added.

Sandstone with traces of fossils composes the façade. There is a single entrance surmounted by a 1912 mullioned window which substitutes the previous 18th century  rose-window.

The church is divided in three aisles, beam ceiling for the center aisle and cross-vault for the side ailes. The arcade is on the side of the church facing Palazzo del Podestà and four apsides face the Town Hall Piazza. There is  an VIII Century  baptisimal font  on the right and a central wooden XV century crucifix.

From the churchyard one reaches the XV Century cloister from which one enters the Museo della Collegiata which hosts works of art coming from the basilica and donations. Of the numerous works  a XV Century Madonna with Child , the Nativity of Cristoforo Caselli, XIV and XV Century frescos, Lombard, Emiliani, and Flemish paintings and ecclesiastic furnishings. The  1722 “Deposition” of Ignazio Stern, paintings by Gaspare Traversi dating to 1753, and works of Felice Boselli and Gaspare Landi to mention only a few.

Palazzo del Podestà was built in 1293 on the initiative of Alberto Scoto and was the site of Town Hall. The brick three floor construction hosts frescos of Antonio Malchiodi in the main hall.

Palazzo Del Duca, today private property, is divided in two parts. The older having remains of a crenelated tower and an arc which encloses a fountain, while the more recent is characterized by windows and cotto decorations. It was the residence of the Sforza and Pope Paul III Farnese lived for three years.

Torrione Farnese was completed by Sforza in 1570 . It is a mighty brick structure twenty meters in height divided in five floors. In the past it was connected to Palazzo Del Duca by an underground passage and a draw-bridge.