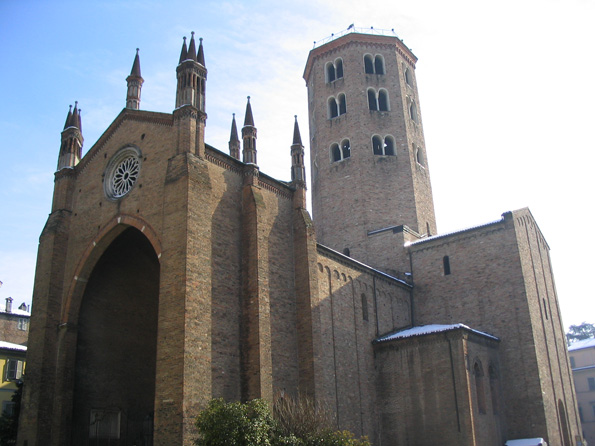 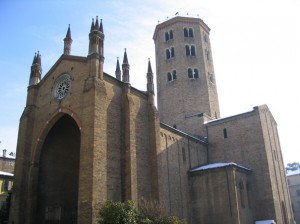 In 218 B.C. the Romans founded one of the most ancient colonies of Northern Italy named Placentia. Afterwards the city of Placentia was crossed by two new roads: via Emilia and via Postumia. It thus became an important intersection of the Roman network of roads and an important river port as well.

In 303 A.D. the Roman soldier Antonino was martyrized close to the town of  Travo and became the patron saint of Piacenza. In the IV and V Centuries, thanks to the first Bishops Vittore and Savino, Christianity spread throughout the city of Piacenza: between the VI and XII Centuries many churches were built.

Four churches to visit in Piacenza

In the piazza bearing the same name, in 350 A.D. the construction of  The basilica of San Antonino began. After undergoing numerous changes,  in 1004 Bishop Sigifredo ordered that the church be built in the shape of a Greek cross. An octagonal tower with three orders of mullioned windows rises at the intersection of the transepts. In the XIV Century, the pronaos, designed by Pietro Vago and known as  Paradiso, was added with a grand ogee arch surmounted by a rose window and pinnacles. A headstone commemorating the 1183 peace of Costanza, signed by Barbarossa and delegates of the Lega Lombarda in this basilica, is situated at the entrance. The   reversed latin cross interior in gothic style was extended during the XIV Century with side chapels. The vaults of the presbytery were decorated with frescos by Camillo Gavasetti from Modena, while there are five paintings of Roberto de Longe along the walls which represent episodes of the life of Saint Antonino buried under the altar.

The Duomo, built between 1122 and 1232, was dedicated to Maria Assunta, and rises on the ruins of the ancient cathedral 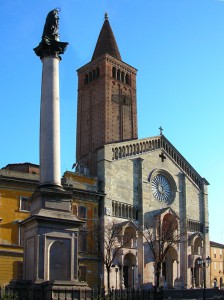 of Saint Giustina demolished in 1117. The Romanesque style façade is adorned by a large central rose window. There are three entrances surmounted by double prothyrums enriched with precious basreliefs. The interior has three naves, the central characterised by women’s galleries  and ogee arches positioned on elegant Romanesque arches.  The intersection between the transepts and the aisles are decorated with frescoes of Camillo Procaccini, while the octagonal dome cladding has frescos  of Guercino and Morazzone executed in the years between 1625 and 1627. The vaulted ceiling of the presbytery is also enriched with frescos: “L’Incoronazione della Beata Vergine” by Procaccini decorates the central vault, while Lodovico Carracci painted the frescos of the lateral vaults. In 134, a gold-plated copper angel known as “Angilon” was placed on top of the 1333 bell tower, seventy one metres in height. The bell tower also served for civil purposes. Ludovico il Moro, Duke of Milan and Lord of Piacenza, added a wrought-iron cage to the tower to punish evildoers. The IX Century Greek cross shaped  crypt has 108 columns and hosts the relics of Saint Giustina Martyr of the IV Century.

The basilica of San Savino, situated in Via Alberini, is dedicated to the second bishop of Piacenza after San Vittore and was first built in the V Century. In 899 it was destroyed by the Hungarians and rebuilt around the year 1000. The church underwent numerous changes throughout the centuries, as for example the 17th Century baroque façade which covers the original Romanesque. The interior has three naves supported by pillars decorated with capitals having animal, plant and monstrous  motives. The crypt, built around the year 1000, houses an urn containing the relics of Saint Savino and the floor is decorated with precious mosaics representing the zodiac.

In Piazza Cavalli, at the corner of via XX Settembre, the lombard gothic basilica of San Francesco was built in the XIII Century. The façade is surmounted by three spires and a central rose window.

A commemorative stone recalls that the annexation of the town of Piacenza to the Regno of Piemonte and Sardegna in 1848 was proclaimed inside the cloister of the basilica. The interior has three naves supported by cotto pillars. The Risorgimento patriot  Giuseppe Manfredi is buried in a bronze tomb obtained from Austrian cannons. “ La deposizione della Croce” sculpture  attributed to Mochi is in the presbytery. The chapel to the right is dedicated to Beata Vergine and is decorated with XVI Century  frescos by Giovanni Battista Trotti know as “il Molosso”.

Piacenza can easily be reached by car from Podere Casale in about 40 minutes.