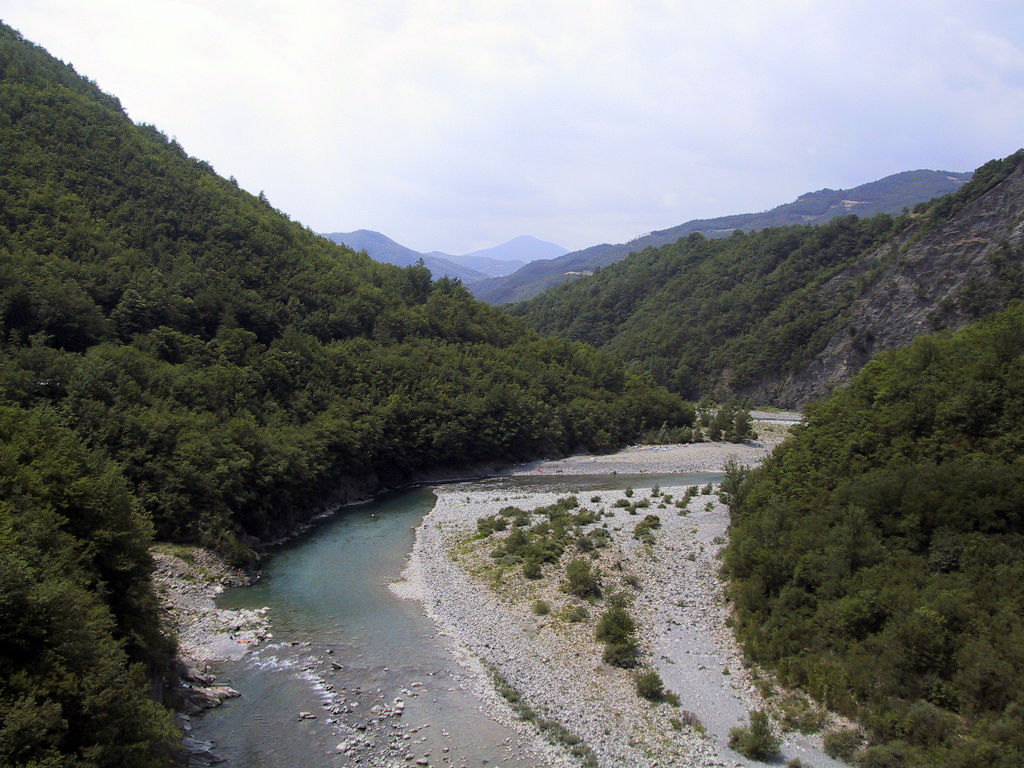 Val Trebbia valley is one of the most striking valleys of the Piacenza Province and according to authoritative witnesses, Ernest Hemingway  defined it as ”the most beautiful valley in the world”.

Val Trebbia is formed by the Trebbia river which originates at Mount Prelà and flows on the border with Liguria and the Pavia Province down to the padana plain through the Piacenza territory. The river flows through 14 municipalities in the Piacenza Province: Ottone, Zerba, Cerignale, Marsaglia, Coli, Bobbio, Travo, Agazzano, Rivergaro, Gazzola, Gossolengo, Gragnano Trebbiense, Rottofreno and Calendasco.

The Trebbia river flows through deep canyons forming meanders and small lakes amidst steep wooded slopes and wild fascinating landscape. The river flows for110 kilometers before joining the Po river and its fresh waters are full of barbells and trout. A summer destination for swimming and sun bathing and a year round place for fishing, rafting and canoeing.

In upper Val Trebbia valley there are rich green pastures whereas the woods are full of oak, hornbeam, chestnut, maple, beech and larch trees – a perfect habitat for dormouse, wild bores, eagles and buzzards.

The medieval town of Bobbio lies at the base of Mount Penice and is one of the most important tourist attractions of the valley. Bobbio was founded by the Irish monk San Colombano and it became one of the most important cultural centers of Europe during the Middle Ages. There are numerous splendid architectural jewels that merit a visit such as Ponte Gobbo, the Cathedral of San Colombano, The Abbey, The Basilica Of  Beata Vergine dell’Aiuto and the Malaspina Castle. In the area surrounding Travo, Pietra Parcellara, Pietra Perduca and Pietra Marcia are rare examples of rock formations.

As the river flows towards the padana plain, the town of Rivergaro surrounded by rolling hills, vineyards and woods welcomes tourists with its parco acquatico, Villa Anguissola Scotti, the Church dedicated to Saint Agata and the Sanctuary of Madonna delle Grazie which dates to the X century.

Gossolengo is only a few kilometres from Piacenza and is surrounded by cultivations of corn, tomatoes and wheat. In 1877, in the locality of Civernasco, the famous fegato etrusco was discovered. It is a Bronze object having the shape of a liver and was used by the Etruscans during rituals. It is conserved in the Museum of Palazzo Farnese in Piacenza.

Evidence of the strategic importance of Val Trebbia through the centuries is the presence of numerous castles throughout the valley. The most important are the Castle of Calendasco, the Castle of Rivalta and the Castle Malaspina in Bobbio

The above mentioned localities can all be easily reached from Podere Casale by car on the State Highway 45 from Piacenza  through the entire Val Trebbia valley all the way to Liguria and Genova.