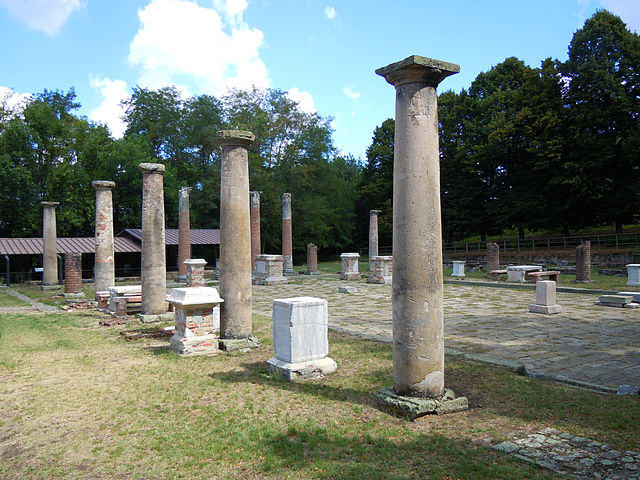 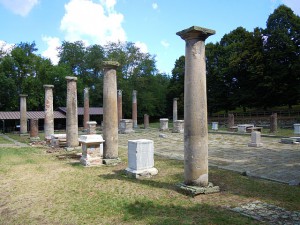 Veleia Romana is a Roman archeological site situated in the hills of Val Chero about 35 kilometers from Piacenza. Originally inhabited by the Veleiates from Liguria, during the first century A.D. it was occupied by the Romans and became a flourishing Municipium valued for its therapeutic sulphurous, saline water and for its wine. Around the third century B.C. frequent landslides partially destroyed Veleia and determined its progressive abandon.

In 1747, while working the land, the tabula alimentaria traiana was accidentally discovered, still today considered the most important Roman bronze document. A bronze sheet measuring four square meters with inscriptions divided in six columns and two groups of mortgage obligations conceded by the Emperor Traiano to landowners at a 5% interest rate. The alimentaria was created to sustain agriculture and contrast depopulation. The money obtained from interest rates was used to guarantee sustenance for children and avoid poverty. On the Tabula traiana found in Veleia, fifty one obligations corresponded between 101 and 106 A.D are documented with the names of landowners, names of the properties, their location and evaluation. Two hundred forty six boys and thirty five girls benefited from revenues.

Filippo di Borbone, Duke of Parma & Piacenza, ordered regular excavations in the area as of 1760. In 1763, the Forum was discovered as well as pieces of ancient bronze legislation: Les Rubria de Gallia Cisalpina.

In 1940 the entire area underwent restoration and as of 1966 the site is under tutelage of the Sopraintendenza dei Beni Archeologico of Parma & Piacenza.

The remains of Veleia Romana are the faithful reproduction of a small ancient Roman town with thermal baths, windmill, oil mill, shops, homes, Forum, basilica, the Tempio, well, and the amphitheatre. Veleia can be visited every day except Mondays. For info Tel. 0523/807113