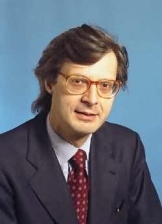 VITTORIO SGARBI visits Vicobarone and speaks of the past with an eye on the future. 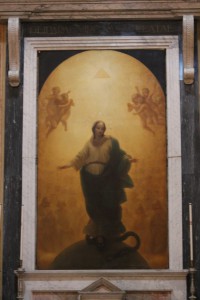 The church is full, all are silent and listen to the words of the Professor from Ferrara, never boring, no yawns , everyone listens to his lecture which interweaves history and current events, beginning in 1858 ( the date in which  the painting becomes patrimony  of the Vicobarone parish) up to present days. History of the past when Vittorio Sgarbi – guest of the Banca Di Piacenza for the presentation of the painting of Francesco Scaramuzza dedicated to the Immaculate Virgin Mary – recalls the 19 Italians killed in Nassirrya. His excursus begins with a comment regarding the San Colombano Church  where worshipers are not facing the alter but the painting of Scaramuzza. “The painting has a function of protection against the devil. The Virgin at first ascends to the sky and then descends and crushes the serpent .with her foot. The serpent represents Evil and the Virgin rushes to aid mankind with passion and compassion. Protection of Mankind. This is the passage that brings us to the present and to the politician. “ The martyrdom of 19 Italians has strengthened our identity with our Nation, which has been lost but has never been as strong as it is today.” The reference is the presence of Italian troops in Iraq.” Our presence has a double meaning – the first political and military but also religious.” The lecture returns to the protagonist of the evening – Scaramuzza. Whom Sgarbi acknowledges the gift of “medium” and speaks of a psychological atmosphere. Sgarbi explains  that “ Scaramuzza has this gift and takes advantage of it to create his paintings and depart for a trip in the afterworld; he is convinced he is speaking with souls and he returns from his trip with images he uses to realize his drawings of the” Divine Commedy”. The same technique used in the painting of  “L’Assunta of Cortemaggiore” where you breathe the same atmosphere while listening to the Choir of Vicobarone singing Verdi’s music. “Synaestesia “ that is when you observe figures, images and you seem to hear music.” In the painting of the artist of Sissa, we find an evanescent base on his canvas, like the Virgin where rarefied angels appear fused with the clouds in the form of light. “ I had never seen the painting . A phone call and Maurizio Caprara’s comments after having studied the Virgin were sufficient to trust his words. At the Sissa Exhibition I realized I was not mistaken: it is a painting of Scaramuzza.” At this point Vittorio Sgarbi manifests his good spirits. “ A mediumistic attribution – the first time it has happened.” He continues and the central theme always seems to be religion and Christianity is identified in a precise symbol – the Cross. At this point the “ polemic” ( as he defines himself) comments the sentence of a “judge” and quotes Benedetto Croce. “ We cannot deny defining ourselves Catholics” he proceeds and with an unequivocal stand  “ that judge does not understand that also he is a Christian, beyond reasons of cult, he should have also considered culture”. Everyone is spellbound and continue to listen to the words of the Professor but time is up, a plane is waiting for the art critic. A few minutes to say goodbye, sign some autographs while the notes of the Choir accompany his exit.