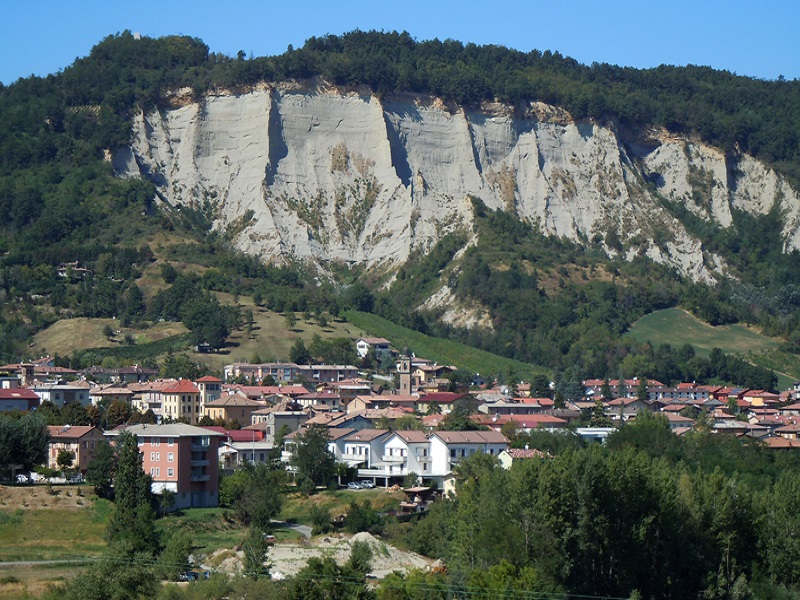 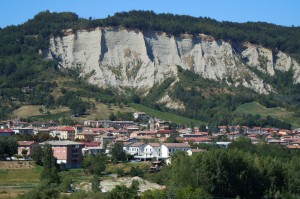 Val d’Arda is the most eastern valley of the Piacenza province, it is crossed from south to north by the Arda stream, borders on the east with the province of Parma, to the west with Val Nure and the Po river delimits the northern border.

The Apennine mountain landscape of  upper Val d’Arda is characterized by a naturalistic panorama of vast  grazing land and pastures populated by cows and horses in the wild. The source of the  Arda stream lies along the slopes of  Mount Menegosa and Mount Lama which are a choice destination for excursionists and Trekking enthusiasts. Parco Provinciale of Monte Moria is the naturalistic center covered by centuries-old luxuriant woods.

Aside from the Mignano dam which intersects the Arda river and forms a large natural basin for numerous fishermen, the territory is mainly hilly and covered with vineyards. Following numerous discoveries of fossils in the area of Vernasca, Lugagnano, Castell’Arquato,Carpaneto, and Gropparello, in 1995 the Riserva Naturale del Piacenziano was created. The riserva covers an area of 345 hectares and was created to protect sedimentary rocks which date to a period up to 1,6 and 5 million years ago. East of Vernasca lies the Parco Regionale dello Stirone, small canyons created by the erosion of its streams with typical fossil and clay stratifications.

The numerous castles of the valley are tangible evidence of the strategic importance of Val d’Arda through the centuries: the castle of Vigoleno, Gropparello,  the rocca Viscontea of Castell’Arquato, the castle of San Pietro in Cerro, Rocca Pallavicino in Monticelli d’Ongina.

The main touristic attraction of the valley is the medieval village of Castell’Arquato, a real architectural jewel of the past set on a dominating position of a lovely hill covered with vineyards.

The ancient via Emilia crosses the flat country of Val d’Arda and along this route we encounter Roveleto di Cadeo with its beautiful sanctuary dedicated to Beata Vergine del Carmelo built in 1696. Collegiata di San Fiorenzo, which dates to the year 1273, is located in Fiorenzuola, while the splendid Cistercian Abbey founded by Bernardo di Clairvaux in 1135, is located in Chiaravalle. There is a basilica, and a 14th century cloister with Veronese rose marble colonnade.

The abbey was an important stop-over for  medieval pilgrims  on their way to Rome along the via Francigena. In Cortemaggiore, the Collegiata di Santa Maria delle Grazie and the church of Santissima Annunziata are worthy of memtion.

In lower Val d’Arda, there are extensive lush orchards; in the spring, beautiful cherry blossoms surround the town of  Villanova where the home and museum of Giuseppe Verdi is located in the community of Sant’Agata.

Parco Isola Gerola, an extensive swamp surrounded by indigenous trees, is located where the Arda stream flows into the Po river, while north of the A21 Piacenza – Brescia highway, close to Monticelli D’Ongina, Parco Isola Serafini is located. It is of naturalistic importance for the numerous bird species which inhabit the park. L’Oasi de Pinedo, near Caorso, is very important for the remains of prehistoric vegetation.

The gastronomic specialties of the mountain area of Val D’Arda are cheese anolini and tagliatelle with porcini mushrooms, chestnut flour polenta, braised bore meat. Local honey is well-known. The flat-lands are famous for the production of provolone and grana padano; the area around Carpaneto is famous for excellent coppa, salame and pancetta. Along the Po river, squash ravioli , small fried marinated fish, fried frog’s legs, and marinated eel are the typical local dishes. Sbrisolona and cherry pie are the desserts. The amari (bitter liquor) produced at the Chiaravalle Abbey are renowned.

Val d’Arda is about 50 kilometers from Podere Casale and a 60 minute drive by car.