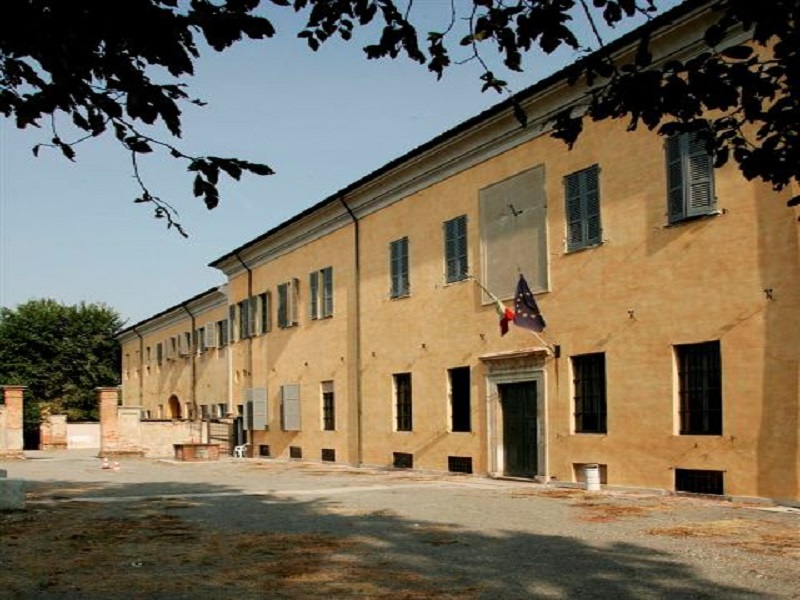 Of the historic monuments and villas of Castel San Giovanni, lovely town of the Piacenza province in Val Tidone, Villa Braghieri, once known as Villa Chiapponi Scotti of Castelbosco, deserves a visit.

Originally, around 1690, close to Castel San Giovanni, along via Postumia, which connected Pavia to Piacenza, there was the  country Casino of Conte Daniele Chiapponi. In 1698, its enlargement and transformation began and from 1713, date of the death of Conte Daniele, his daughter Teodora , wife of Marchese Annibale Adeodato Scotti di Castelbosco, continued the work. 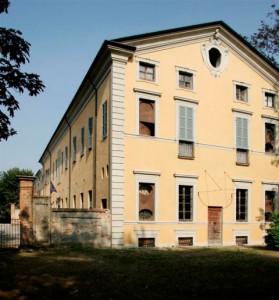 Further work took place between 1780 and 1795 under the supervision of Marchese Carlo Scotti, nephew of Annibale and Teodora, and the villa acquired todays appearance.

When Carlo Scotti died, the family moved to Parma and the villa was sold to Pietro Albesani, president of the Criminal Court of Piacenza, in 1809.

The villa was thereafter inherited by Domenico Gobbi Belcredi, husband of Emilia Albesani , niece of Pietro.

In 1902 Maria Gobbi Belcredi married Gaetano Braghieri and the villa went to their son and daughter Carlo and Teresa in 1905.

The villa has been the property of the Town of Castel San Giovanni since 1996 and the Municipality finances its restoration and opens the villa and park to the public.

August 29th, 1773, Duchess Maria Amalia, Arch- Duchess of Austria, Infante of Spain, and wife of Ferdinando Borbone , was a guest of the villa which at that time belonged to Carlo Scotti. The Queen had visited Piacenza and the following day continued her tour of the castles and towns of Val Tidone. 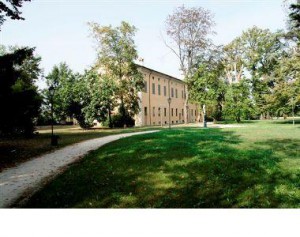 According to the architectural requirements of the 700’s, the façade of the villa overlooks the road which leads to town,  is simple and basic, with a neo-renaissance portal surmounted by a sundial, with eighteen windows on the first floor and seventeen on the ground floor, a second entrance and a larger one for carriages.

The north façade is surrounded by a lovely park with flowerbeds and tall trees.

The eastern façade is more precious with its framed windows surmounted by decorated gables with a unicorn at the center. The playroom is on the ground floor. It is richly decorated with bucolic, naturalistic frescos and opens out onto the garden thus giving a ideal continuation of nature inside and out.

Originally used as the winter dining room, it derives its name from the prevalent color of the neo-classic decorations. Today the room is the newspaper library of Castel San Giovanni.

This room is named after the instruments found in it  since the last restoration – a late 19th century piano Umbertino style and a pianola with a collection of the most important Italian melodramas. The entire room is richly decorated with landscapes and statues of mythological characters. The room is an Info Young People Point since 2004. 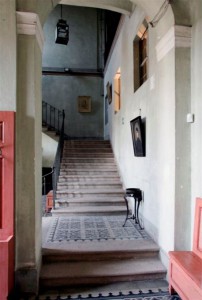 The entrance is decorated with neo-baroque stucco and is joined to the stairway through two arcs having a wide central column. The stone, three flight staircase has a wrought-iron balustrade.and a majestic wrought-iron chandelier.

This room became a library during the period the villa belonged to Albesani. Large glass door bookcases contain volumes which belonged to the Albesani and Braghieri families. There are also volumes of literature, history, philosophy, novels, law text books, art books and a collection of Italian and foreign magazines. The ceiling is richly decorated with neo-classic paintings.

After the 2004 restoration, the paintings on the walls of these two rooms have come to light. The decorations lead back to  16th century motives typical in neo-classic art. The ceiling is lower and the rooms smaller following the changes which took place at the end of the 18th century. 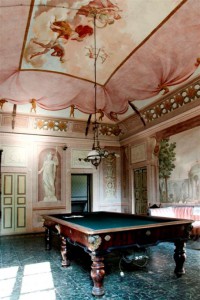 This is one of the most important rooms of the villa with frescos dating to the 700’s. The paintings are trompe l’oeil and represent landscapes. There is a wooden billiard table which dates to the middle of the XIX century and an Umbertino scoreboard.

The furnishings in this room are covered with red tapestries. The antique red marble fireplace is surmounted by a mirror and a large bas relief portraying a parrot which was an exotic mode popular at that time.

This room had furniture dating to the second half of the XIX century in neo-renaissance style.. The walls were decorated with romantic landscapes and the floor dates to 1909 and is geometrical slats of oak.

Located on the mezzanine floor, Carlo Scotti had this chapel built at the end of the 18th century.. It was consecrated in 1829. It is small, with a vaulted ceiling and an altar with precious stucco decorations. The painting above the alter has a frame decorated with bas relief which represent the symbols of Christ’s passion. 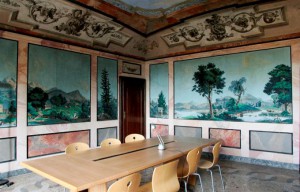 This was the bedroom of the Braghieri couple. It is entirely covered with decorations that represent alpine landscapes and painted with the Papier Peints Panomariques technique of French production at the beginning of the 800’s. Today, this room is the reading room of the library.

The Room of the Angel

This room is named after the little angel at the center of the tempera decorations between the walls and the ceiling which date to 1857. The angel calls for silence and stands out on the cerulean blue background enclosed by a neo-gothic frame. The venetian floor dates to 1907.

This room today is one of the reading rooms of the city library. It was once a bedroom and is named after the stuccos that decorate the walls and represent various hunting scenes. The square tiled floor dates to 1914. 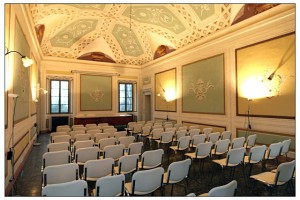 The main room on the first floor, the Receiving room faces the staircase and leads to the various rooms built for leisure and entertainment: the summer music room, the room of large Fans, the Foreigner’s Room. The Receiving Room is well lighted by four windows and finely decorated .

This room is named after the refined stuccos that decorate the walls and depict musical instruments .It is further enriched by an 18th century red French marble fireplace decorated with white marble bas reliefs depicting Ercole after his feats. The furnishings restored in 2008 include elegant damask curtains, a wooden green satin fan and a XIX century Luigi Filippo couch.

Inaugurated in 2010 after conservative intervention, this room is named after the numerous paintings on the walls that depict marine landscapes inspired by the works of Claude Joseph Vernet (1714-1789) a French painter famous for his picturesque landscapes.

This room connects directly with the Landscape room and is one of the most unique rooms of the villa. The walls and the vault are decorated with figures painted with tempera on a pale rose colored background that call to mind the neo-pompei style. The principal figure is that of a female lying on a triclinium surmounted with a canopy held by Egyptian style caryatids.

The Room Of Large Fans

This room is named after the characteristic fan shaped paintings in the four corners of the room. The same theme is also in the center of the vault ceiling , divided in eight veils with floral motives that blend into a double central fan. 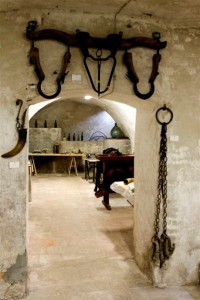 From the entrance, you gain access to the basement of the villa, the most ancient part, where at one time the kitchen, the pantry, the cellar and the ice house were located. Since 2011 these rooms now host the Ethnographic Museum of Val Tidone, which exhibits over two hundred objects including utensils, ornaments, farm and artisan machinery. The exhibition is divided in four sections: Ethnological, Fossils, Archeological, Hardcopy Archives. The entire collection was donated to the City of Castel San Giovanni in 1978 by Professor Fiorello Bottarelli, veterinary and professor at Milan University, after a life of long careful collection.